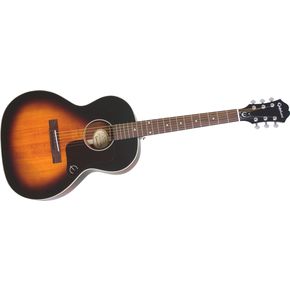 ”Doppelganger for the Gibson Blues King“

The Epiphone EL-00 is an awesome re-creation of the type of parlor guitar that was popular in the 1930’s and 1940’s. Compact and curvaceous, the EL-00 is easy to manage and even easier to play, especially if you enjoy blues style playing or fingerpicking.

In fact, if you’ve ever dreamed of owning the Gibson Blues King but couldn’t afford the price tag, then the Epiphone EL-00 may be just the guitar you are looking for. With a full-bodied sound enhanced by its solid spruce top and mahogany body, this little number has the true authentic vibrancy and ringing sound that the Blues King is known for. And at ~$299, it is just a fraction of the cost.

. Both have the same curvy parlor-guitar shape that fits comfortably against your torso, and both have the starburst pattern that gives them that extra visual appeal. Even a slightly more in-depth comparison shows that they both have solid spruce tops. But there the similarities end.

For $299 the Epiphone EL-00 is quite the bargain, especially when compared with the $2,299 price tag of the Blues King. But if your fingers are itching for that extra depth and flavor, the Blues King does have what it takes.

Epiphone has a reputation for making great acoustic guitars for the price they ask. And while the EL-00 may not be expensive, it is not a cheap acoustic guitar in that it is crafted using Gibson’s standards of excellence. The Epiphone EL-00 may not be the loudest guitar ever made, and it certainly doesn’t have a great deal of sustain like some of its bigger cousins. But it is light weight and incredibly easy to handle, making it a perfect choice for more slightly built players, and a great acoustic guitar for beginners.