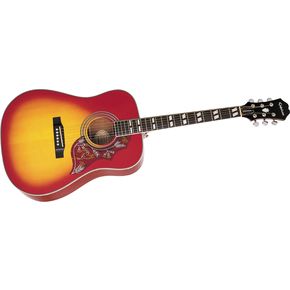 The Hummingbird Acoustic Guitar has a reputation that is second to none when it comes to great acoustic guitars, especially those guitars built on a dreadnought body. One look at the hummingbirds etched onto the pickguard of this model makes one nostalgic for the folk music and freedom of expression that the 1960’s were best known for, and one that has become a real American cultural icon.

Introduced in 1960, the Gibson Hummingbird quickly became the guitar of choice for blues, country and bluegrass players thanks to the Hummingbird’s rich, woody tone and its easy playability. The Epiphone Hummingbird Acoustic Guitar is a more affordable version of this Gibson classic, and will play its part in keeping the iconic tradition of the Hummingbird alive for decades to come.

Built with a solid spruce top for a vibrantly rich tone and excellent projection, the Epiphone Hummingbird has the same woods as the Gibson model, including the mahogany back and sides; a fact which contributes to both guitars having the warm, woody tone that makes it so well loved by so many. When it comes right down to it, however, while the Epiphone Hummingbird stands up well to all styles of playing, the Gibson Hummingbird just has more punch.

While the dreadnought body of the Epiphone Hummingbird may make it a bit large for some players to handle, it stands up well to all styles of playing. Between the Epiphone Hummingbird’s smooth action, eye-catching sunburst design and it’s surprisingly affordable price, it will have you falling in love with your own American cultural icon.

Shop safe at Musician's Friend and enjoy FREE SHIPPING on EVERYTHING - No Minimum!