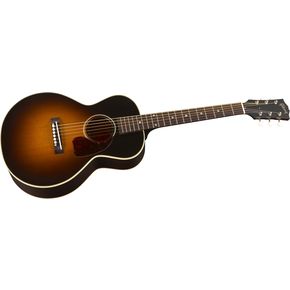 ”A Legendary Guitar for the Fingerstylist”

In addition to its fascinating history, its legacy is furthered by the awesome sound that is a result of combining an AA-grade solid Sitka spruce top with solid Honduran mahogany back and sides. The mellow resonance of the LG-2 projects surprisingly well given that the LG-2 is built on Gibson’s legendary L-00 small body.

With bright, bell-like tones there are some that find the LG-2 to be too cheerful. And if your pick action is heavy or your strumming too vigorous, the LG-2 can become a bit shrill. But for fingerstyle blues type work, this guitar is a dream and its small size makes it particularly attractive as a kids acoustic guitar or to more slightly built players.

Gibson has a reputation for great acoustic guitars and while the Gibson Arlo Guthrie LG-2 may be a bit on the high side at $1,999, it certainly lives up to its name.