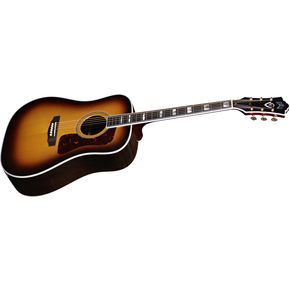 ”A Classy Classic for Half the Price”

The Guild D-55 Dreadnought Acoustic Guitar has an elegance that matches its full, balanced tone and plays so smooth you’ll wonder if it’s actually you doing the work or if maybe the guitar is helping you out a bit.

Built on a dreadnought body, the D-55 has an AAA grade solid Sitka spruce top that is braced with red spruce for ultimate sound and resonance, but it doesn’t end there. The D-55 also has solid Indian Rosewood back and sides that lend it a rich, woody tone that will steal your heart away.

The D-55 is not a small guitar. In fact, it is large enough that it can be rather intimidating for smaller players. But that doesn’t keep it from having the volume and projection that have made the dreadnought such a popular guitar model since it was first introduced.

It is also a versatile guitar, able to take on the challenges of solo work, but also able to blend with an ensemble or group. It also works well regardless of the musician’s playing or picking style, and will hold up just as well to flatpicking as it will to fingerstyle playing.

While the guitar reviews can tell you about the woods that are used to create the D-55, the size of the instrument and even what those who have bought it have thought of it, what they don’t tell you is how you can almost feel the notes before they are played; how the resonance and tone are so subtle and deep that they travel right up your fingers and resonate in your head.

In fact, playing a D-55 is quite similar to playing a Martin D-28 Marquis

Martin D-28 Marquis, with the same sort of power and flexibility. But, with the Guild D-55 only costing ~$2,799 (as compared to the Martin’s ~$4,099) you will be saving yourself a considerable amount of money by buying the Guild and will be getting a classy styled, classic build acoustic guitar in the process.