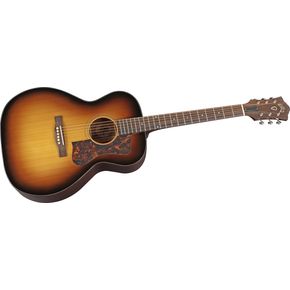 ”This Guild Compares Favorably to Gibson”

The Guild F40 Valencia Guitar is probably the most unique guitar that Guild offers. But not only is the F40 aesthetically astounding, it also produces a sound that will blow you clean away.

Made with a solid red spruce top, solid mahogany back and sides as well as a rosewood bridge, this guitar is more than just visually appealing. The depth and variety of its wood grains combine to give it a warmth and richness of tone that one would expect only out of a much more expensive guitar; and the F40 is not a cheap acoustic guitar!

At ~$2,249 (including its deluxe hardshell case) the F40 can stand up to both flatpicking and fingerstyle playing with finesse and aplomb. And its Grand Orchestra body makes it very approachable; its curves enabling even smaller players to handle it. But it’s the not just the sound that will amaze you (or the price for that matter) it is also the way that the F40 handles; like butter if you will; smooth and rich and easy. Too easy. It almost feels as if you are being helped when you play the F40.

In tone and character, you would have to compare the Guild F40 to the Gibson GS5 which has the same tonewoods and (surprisingly) is the same price. However (and it has to be said) there is something just a little bit richer about the Guild. The Gibson comes across as almost too bright in comparison.

Besides its price tag, which can be a bit much to swallow, the F40 does have one fundamental flaw; it has charisma. You’re going to fall in love with it, and it is probably going to become your favorite guitar ever.