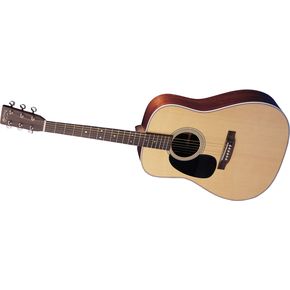 The Martin D-28 Left-Handed Dreadnought is a version of the popular Martin D-28 designed especially for left-handed musicians. Martin makes some of the best acoustic guitars available today, so it’s hardly a surprise that they have created a version of the D-28 that is perfect for the discerning southpaw.

The Martin D-28 is one of the Martin Company’s greatest achievements and is to this day known as the standard for all other steel-string guitars on the market. But regardless of its reputation, it is the tone of the D-28 that will knock you off your feet. The D28 has been likened as the “Cinderella at the Ball”, since she looks very plain but she resonates like an absolute princess.

The D-28 is made with a solid Sitka spruce top and solid East Indian Rosewood back and sides. While this combination of woods contributes to the D-28’s robust sound, the fact that it is built on a dreadnought body also comes into play.

The sheer size of the D-28 is impressive, though it can be a bit intimidating to the younger or smaller sized players. But the combination of its broad shoulders, deep body and resonant woods gives the D-28 a loudness that cuts through everything in its way and produces a sound that is simultaneously warm, resonant, and strong enough to be heard even in the most extreme situations and lends itself well to aggressive strumming and flatpicking. It is not, however, well adapted to fingerstyle playing and can sound a bit mushy, especially in the bass notes when a pick is not used.

At <$2,399 the D-28 Left-Handed Dreadnought Acoustic Guitar is an excellent choice for the serious left-handed musician and an investment that will serve them well for years to come.