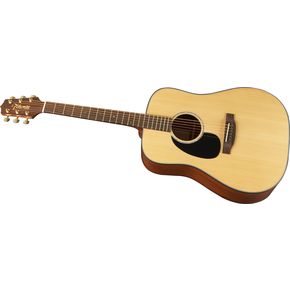 ”Bringing Lefties into the Fold”

The Takamine G Series Dreadnought G340LH, is a left-handed acoustic guitar designed specifically to provide the left-handed guitarist with an instrument that will enable them to pursue their dreams.

Takamine has overcome both problems with their G340LH; a guitar built specifically for left-handed players and with a price at <$250 that won’t break the bank.

Although its top and body are made from laminated woods (laminated spruce for the top and laminated mahogany for the body), the G340LH has a surprisingly rich sound which can be attributed to its dreadnought shape featuring a deep body and wide top.

While the dreadnought depth and shape can make this guitar difficult to manage for those whose builds are smaller than average, the tone of this beautiful instrument is lovely, and will not disappoint.