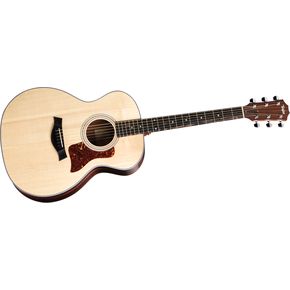 ”Quality You’ll Take a Shine To”

There is just one way to describe the Taylor 214G Grand Auditorium; it sparkles. No, it’s not the guitar of choice for hot vampire dudes, but rather the combination of quality, tone and looks that lends this model its awesome appeal.

Taylor is known for making some of the best acoustic guitars for sale today, and the 214G is no exception. Being the first guitar shape designed from scratch by Bob Taylor himself, the 214 G was released in 1994 to celebrate Taylor’s 20th Anniversary. Its narrow waist makes it appear smaller than a typical dreadnought, but it still has the depth of tone; a rich rounded, bell-like sound that is only made better by the added treble emphasis lent to it by that hourglass shape.

The richness of the 214G’s tone can be attributed to a combination of its unique shape, as well as its solid Sitka spruce top and Indian rosewood back and sides, obviously a winning combination.

On the downside, while the 214G lends itself especially well to flatpicking, it loses its quality of tone when used for fingerstyle playing. And even while flatpicking you need to be careful, for too emphatic of strumming can make it lose its tonal integrity.

But if your style is flatpicking, and you are not too emphatic of a strummer, you’ll find that no other guitar in this price range ($799, including a gig bag) will give you this sort of quality.