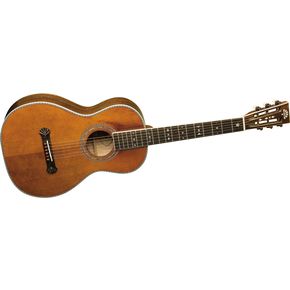 The Washburn R314KK Parlor Acoustic Guitar brings to life the golden era of acoustic guitars. Before television or even radio if you wanted music you had to play it yourself (or listen to someone else play it). Thus, the late 1800’s and early 1900’s saw a great number of instruments made available to the masses; the parlor acoustic guitar among them.

Made to replicate the small, personal guitars that could be played by anyone, the R314KK is built on a parlor platform body far smaller than the standard sized dreadnoughts that are so popular today, making it a great choice for younger or smaller guitarists. But its uniqueness doesn’t end with its small size.

The R314KK has a solid spruce top and is made with Trembesi tonewood for its back and sides; a combination that gives it a unique texture that immediately draws the eye and an unusually warm, woody tone that puts one in mind of the blues players of the early 19th century. But it isn’t just the looks or the tone that make the R314KK special, it’s also the volume. This little number’s volume is impressively strong for a guitar of its size though it does tend to get a bit twangy if too heavy of strings are used or the player uses it too aggressively.

At ~$399, the R314KK is an affordable choice for a good acoustic guitar; a modern take on a classic favorite that will keep you smiling.